5 Things You Should Know About Dementia

Dementia is very often associated with Alzheimer’s disease. They are not the same, though. Dementia is a term that describes a set of symptoms out of which memory loss is the most common one. It is not a disease, but rather a condition that affects the way people behave. Alzheimer’s disease (a neurodegenerative disease that affects brain cells in the brain) can cause dementia.

1. Memory loss is not the only symptom of dementia

There are many types of dementia. Some of them are vascular dementia, dementia with Lewy bodies, and frontotemporal dementia. All of them give various symptoms. How you feel depends on which area of your brain has been affected. The early stages are difficult to diagnose because they may not seem harmful. These are forgetfulness, problems with concentration, mood changes and struggling to find the correct word during the conversation.

We all experience these things at some point in life, don’t we? And we do not jump straightaway to the conclusion that we may suffer from dementia if they occur. It obviously does not need to be the case. However, if you are at an older age and you constantly find yourself having problems with the above, and if the symptoms do not disappear or improve over time, then you may need to consult a doctor.

2. Every type of dementia has slightly different symptoms

As previously mentioned, Alzheimer’s is the most common type of dementia. Some of the symptoms of Alzheimer’s are forgetting names and places, difficulties with organisation and planning, and withdrawal from social life. People with vascular dementia (the second most common type of the condition) experience movement problems, difficulty with being focused, muscle weakness and depression.

Hallucinations, repeated falls, insomnia, and becoming slower in physical movements occur when a person has dementia with Lewy bodies. Finally, frontotemporal dementia affects people aged 45-65, and it causes withdrawal from social life, personality changes, and difficulty with language. All these symptoms vary, even though they have some common features. It is because they are dependent on the part of the brain that has been damaged.

3. Dementia does not affect everyone in older age

Not only it does not affect everyone in older age, but there are ways to prevent it. Healthy lifestyle and enough amount of exercises can highly contribute to the person’s well-being. It is true that if you are older, you are more likely to develop dementia. But, you do not have to be affected by the condition.

Genes can cause some unusual forms of dementia, however. Huntington’s disease is an example. What can you do to stay fit and healthy for as long as possible? Try to get a healthy amount of physical activity, even at an older age. It may be a good idea to join some aerobic classes, go for walks when the weather is warm, or do house activities yourself if you are still mobile.

There are some exercises for disabled people as well if you are immobile or in a wheelchair. Physical activity helps people to stay fit, and it translates into better health. A sedentary lifestyle is not good for your health. Our brains need as much exercise as our bodies. Keep yourself physically and mentally active! 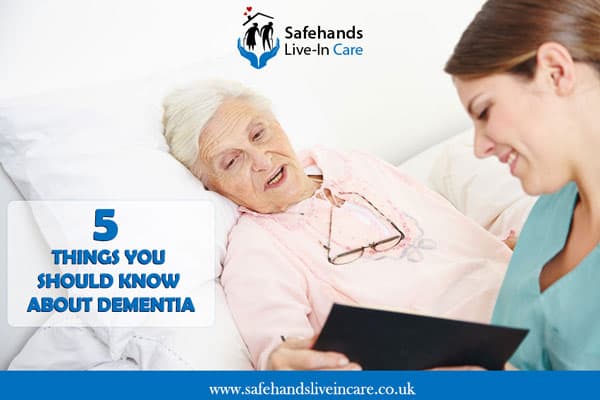 People with dementia may behave in various ways. They may sometimes put themselves in danger. It is because of their decreased ability to reason. They may become physically or verbally aggressive, behave in sexually inappropriate ways or continually repeat certain phrases and expressions.

All these changes are dictated by the damages caused in their brain. People with dementia may want to leave the house at night, have a hallucination or be in pain. It is necessary to calm them down when they become aggressive. If you manage to identify what triggers for certain behaviours, you eliminate them so that the situation does not occur again.

Sometimes, they lose appetite. It is a good idea to ask them what they would like to eat and cook that for them. Keeping them a company and encouraging to eat healthy and nutritious meals may be helpful as well.

5. Dementia live in care – how can a carer help?

A carer is a professionally trained individual who knows how to care for people with different conditions, also dementia. There are different types of care available. If you know that your loved one has Alzheimer’s or dementia and you cannot stay with them 24/7, then live in care service may be a good choice. Care homes are alternative to home care.

Live in care is a service when a carer comes to live in the client’s house and offers round-the-clock support. They prepare nutritious meals, do shopping, assist with medication, take the client to medical appointments, and offer company during family gatherings and other social meetings. Carers usually encourage the client to pursue their interests and hobbies, so their esteem does not decrease.

Carers offer emotional and physical support. There is also respite care available when a carer cares for your loved one for a specific period when you cannot be around. It can be because you have a business trip or because you simply want to go for a holiday.

Dementia is a term that describes a set of symptoms that vary depending on the type of dementia someone has. Older people are more prone to be affected by the condition. Older age is not an indicator, however. It can happen to anyone. A healthy diet and physically active lifestyle can prevent dementia.

Every person affected by that condition is different, and not all people will behave the same. If you care for someone with dementia, get to know them as a person first. Learn about their history, likes and dislikes. Always try to put yourself in someone else’s situation. It will give you the idea of what they are experiencing. You will become more emphatic, patient and eventually will learn how you can support them better. Dementia does not define a person.

It is a condition that affects the way they behave. And yes, some symptoms are similar, but behind all the diagnosis there is an individual that has a history to share, beautiful memories and preferences that should be respected.

Some more dementia related articles below

5 ways of spotting abuse in people with dementia

5 ways of spotting abuse in people with dementia

Alzheimer’s, Dementia and Managing your Finances

Alzheimer’s, Dementia and Managing your Finances